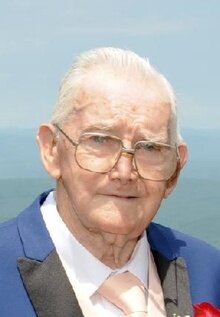 Please share a memory of Robert to include in a keepsake book for family and friends.
View Tribute Book
Robert M. Ward a longtime resident of Plattekill, NY passed away peacefully at home surrounded by his loving family. He was 86. Mr. Ward proudly served in the U.S. Air Force and would later go on to make his home in Plattekill, NY where he and his wife of 52 years would raise their 3 daughters. He was a man of strong Catholic faith and raised his daughters the same. Throughout the 70’s dad worked for Crowleys milk company, he knew everyone and everyone knew him. He would later go on to work for Millbrook bread. Dad was a simple man who loved to just be home with his family. In his free time dad would spend his summers outside at the wood pile cutting and splitting wood for the long cold winters ahead. He continued to do this through his early 80’s, it was his happy place. He will be terribly missed by his family and friends. Survivors include his wife Katherine D. Ward, his three daughters Diane Fowler and companion Jon Hill, Anastasia Ward, Tracey Armbrister and her husband Chris. His grandchildren Michelle Ward, Michael Ward, Emily-Kate Fowler, Mikey Heller, Gabby Heller, Christian Armbrister and his great grandchildren Hunter Veneziano and Makayla Veneziano, and several nieces and nephews. He was predeceased by his parents Robert and Clara Ward, his sister Maureen Brunetti and his nephew Albert Brunetti. Visitation will be Monday October 4, 2021 from 4-7pm at Hudson Valley Funeral Home 239 Quassaick Ave. (Rte94) New Windsor, NY. At the family’s request we kindly ask that all visitors wear a face covering in the funeral home. A funeral Mass will be celebrated on Tuesday October 5, 2021 at 11am at Our Lady of Fatima Church at 1250 NY-32 Plattekill, NY 12568. Burial will follow in Calvary Cemetery New Windsor, NY with Military Honors.
To send flowers to the family or plant a tree in memory of Robert Ward, please visit Tribute Store
Online Memory & Photo Sharing Event
Online Event
About this Event

Look inside to read what others have shared
Family and friends are coming together online to create a special keepsake. Every memory left on the online obituary will be automatically included in this book.
View Tribute Book
Services for Robert Ward
There are no events scheduled. You can still show your support by sending flowers directly to the family, or planting a memorial tree in memory of Robert Ward.
Visit the Tribute Store
Share Your Memory of
Robert
Upload Your Memory View All Memories
Be the first to upload a memory!
Share A Memory
Send Flowers