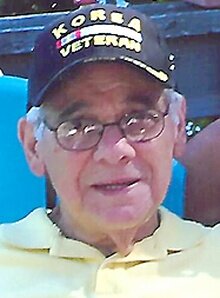 Please share a memory of Joseph to include in a keepsake book for family and friends.
View Tribute Book
JOSEPH MONTE JR. October 29, 1931 - March 10, 2019 Joseph “Joe” Monte Jr., 87 a longtime resident of New Windsor, NY entered into rest on March 10, 2019, at home with his loving wife by his side. The son of the late Joseph and Jennie (Timpone) Monte Sr. He was born on October 29, 1931, in Newark, NJ. In 1949 he joined the United States Army and proudly and faithfully served with the 92nd Armored Artillery Battalion in operations in the Korean War. He was a loving husband, father, grandfather and great grandfather, brother in law and friend to many. He loved company and conversations with his family and friends at his house especially talking about sports, playing poker and asking when are we going to the casino. On July 26, 1953, he married the love of his life Lillian (Ciccarello) at Sacred Heart Church in Newark, NJ. They were married for 65 years. Besides his wife, he is survived by his daughters and spouses Teresa Monte-Caruso (Michael) of Poughkeepsie, NY, Joanne Tomlins (Kenneth) of Northfield, NH. His grandchildren Nicolle Casale (Larry) of Manchester, NH, and Kenny Tomlins of Northfield, NH. His Great grandchildren Khloe Grace and McKenzie Mae Casale of Manchester, NH. His sister Micki Monda (Frank) of New Jersey, sister in law Antonina LoPresti of Newburgh, NY, brother in law Albert Ciccarello (Mary) of Edgewater, FL, and many nieces, nephews, cousins and friends. He was predeceased by his siblings and their spouses Rachael Beniquista (Frank), Anthony Monte (Annette), Angie Nigro (Sal), Ralph Monte (Rocky), Jeanne Monte, Michael Monte, Francis Spoto Yolanda Palma (Anthony) Lucy Montanelli (Benjamin), Theresa Marchegiano (Angelo). He was also predeceased by his sister in laws and brother in laws Joseph and Angelina Smolinsky, Andrew and Ella Mae Ciccarello, Clyde and Vera Lince, Philip Ciccarello, James LoPresti, Kenneth and Rita Weatherly and James Ciccarello. The family would like to thank Dr. James Dilorenzo, Dr. B. Hadid, Dr. Richard Diamond and Dr, Profeta for taking care of Joe. We also like to thank Willcare and Hospice for their compassion and support for Joe in his final days. We also like to thank Castle Point. Visitation will be held from 4-7pm on Thursday, March 14, at Hudson Valley Funeral Home, Inc. 239 Quassaick Avenue (Rte94) New Windsor, NY. Funeral services will be 10:30 am on Friday, March 15, at the funeral home burial will follow with military honors in Calvary Cemetery. In lieu of flowers memorial contributions may be made to American Legion 29 Walnut St. New Windsor, NY 12553
To send flowers to the family or plant a tree in memory of Joseph Monte Jr., please visit Tribute Store
Online Memory & Photo Sharing Event
Online Event
About this Event

Look inside to read what others have shared
Family and friends are coming together online to create a special keepsake. Every memory left on the online obituary will be automatically included in this book.
View Tribute Book
Services for Joseph Monte Jr.
There are no events scheduled. You can still show your support by sending flowers directly to the family, or planting a memorial tree in memory of Joseph Monte Jr..
Visit the Tribute Store
Share Your Memory of
Joseph
Upload Your Memory View All Memories
Be the first to upload a memory!
Share A Memory
Send Flowers