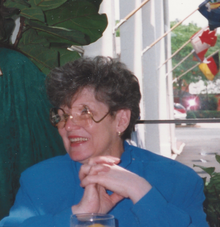 Please share a memory of Shirleyann to include in a keepsake book for family and friends.
View Tribute Book
Shirleyann Theresa Rossi was born to the late Beatrice Herrick Olivero and John Olivero at West Point, NY on June 5,1935 and departed this earthly life on May 17, 2021, at home. The oldest of five children - John Olivero, Jr. (deceased), Rosalie Minetos (deceased), Rudolph James Olivero (deceased) and Debra Olivero. She graduated from Ladycliff Academy, Highland Falls in June 1953 and married Achilles “Kelly” Rossi that December 1953. They had two daughters - Martha and Michele. A Brownie and Cadet Girl Scout leader, as a young housewife, she also did charitible work for her church, Sacred Heart of Jesus in Highland Falls and as a volunteer at the Cornwall Hospital. When her children entered grade school, she returned to study also, achieving a cosmetology license and eventually establishing two Beauty Salons - The House of Venus in New Windsor and the Fireside Beauty Salon in Cornwall, NY, which she owned until her health forced her to step back. Regrouping and taking courses at Orange County Community College and Mount St Mary’s in Newburgh, Shirley began a career at the US Military Academy at West Point, NY in the Finance Office. She retired as the Chief of the Accounts Maintenance Section. Typically, while at West Point, she took on other responsibilities establishing the Federal Women’s Program, at that time a collateral duty. She presented this Program at Federal conferences and by the time of her retirement it was a full time position, part of the Equal Opportunity Office. In later, years, while assisting a home move, her daughters found a syllabus from a conference in Washington, DC where Maya Angelou was also a presenter and Shirley shared wonderful anecdotes about her. Among many honors and recognitions, she recieved at West Point, was the USMA Equal Employment Opportunity Award given by the Superintendant at a Cadet Parade Review in Sept 1978. Shirley’s other talents were many. Throughout the years she was active in motorcycling and camping with her husband, “Kelly”. They toured from Canada to Key West on their motorcycle. They belonged to several motorcycle organizations, such as Spokes and Sprockets (charter members), a club for professional couples who ride, The Retreads, a national touring group for those over 55, as well as MC safety and identity clubs ie: American Motorcycle Assoc. and others. She had been a past member of Zonta International; Ladies Auxillary of the American Legion New windsor Post 1796; President of the Woman’s Auxillary of the Italian American Social Club of West Haverstraw; sat on the Advisory Board of the Orange County Office of the Aging; and was actively involved in running the Senior Games for many years. Left to cherish her memories are her husband Kelly, children Martha and Michele, sisters-in-law Rosalie Rossi and Pamela Olivero (Rudolph James), sister Debra Olivero, Aunt Theresa Martinisi (Reziero George), god children Anthony Martinisi (Cara), Sharisse Vargas (Federico) and many cousins, nieces and nephews. Visitation will be 4:00 - 7:00 pm Monday, May 24, 2021 at Hudson Valley Funeral Home 239 Quassaick Ave, New Windsor, NY. Funeral Mass will be held at 10:00 am Tuesday May 25, 2021 at St Francis of Assisi Catholic Church 145 Benkard Ave Newburgh, NY with Father Bill Damroth officiating and Deacon Tony Ferraiuolo assisting. Burial will follow at Calvary Cemetary, New Windsor, NY.
To send flowers to the family or plant a tree in memory of Shirleyann Rossi, please visit Tribute Store
Online Memory & Photo Sharing Event
Online Event
About this Event

Look inside to read what others have shared
Family and friends are coming together online to create a special keepsake. Every memory left on the online obituary will be automatically included in this book.
View Tribute Book
Services for Shirleyann Rossi
There are no events scheduled. You can still show your support by sending flowers directly to the family, or planting a memorial tree in memory of Shirleyann Rossi.
Visit the Tribute Store
Share Your Memory of
Shirleyann
Upload Your Memory View All Memories
Be the first to upload a memory!
Share A Memory
Send Flowers