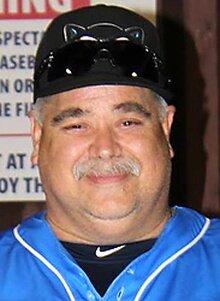 Please share a memory of Paul to include in a keepsake book for family and friends.
View Tribute Book
PAUL JAMES HORAZ June 3, 1961 - April 13, 2018 Newburgh, NY Paul James Horaz, a Sergeant with the City of Newburgh Police Department and a long time resident of Newburgh passed away peacefully Friday, April 13, 2018, at St. Luke’s Cornwall Hospital in Newburgh, NY. Paul worked for the City of Newburgh for 30 years; 28 of those years were spent as a police officer. He dedicated his life to the profession and considered the police force his family. Anyone who knew Paul knew that he was a long time season ticket holder and super fan of the Hudson Valley Renegades. He looked forward to spending his summers at “the Dutch” watching games. Paul was also known for his yearly, extended Florida/Disney trips with his son John. He also loved his dogs, and nothing gave him more peace at the end to know that his dog Princess would be in a good home after his passing. Paul is survived by his son, John Paul Horaz and his mother, Jenine Horaz; father, Paul Horaz of Montgomery, NY; mother, Nancy Scott Rosenberger and her husband, William of Little River, SC; brother, Michael Horaz and his wife, SueLynn of Cornwall, NY; sister, Kristy Horaz-Wade and her husband, Chad of Newburgh, NY; brother, Randy Rosenberger of Huntington, PA; Mark Rosenberger and his wife, Cheryl of Los Alamos, NM; Eric Rosenberger and his wife, Robin of Indiana, PA; Gregory Rosenberger and his wife, Bonnie of Myrtle Beach, SC; and Alec Rosenberger and his wife, Alison of Dunkin, SC. He is also survived by a number of aunts, uncles, cousins as well as several nieces and nephews. He is predeceased by his sister, Lori P. Fedor. The family would like to thank all the doctors and nurses on the second and fourth floors of St. Luke’s Cornwall Hospital for their compassion and thoughtfulness in our time of need; especially the nurses who provided extra heartfelt diligent care for Paul and the family during those final days. Visitation will be held 1 to 3 and 6 to 8 p.m. Monday, April 16, 2018, at the Hudson Valley Funeral Home located at 239 Quassaick Ave, New Windsor, NY 12553. A graveside service will be held at 1 p.m., Tuesday, April 17th at Cedar Hill Cemetery in Newburgh, NY. In lieu of flowers, the family requests donations are made to the Dutchess County 10-13 Foundation athttp://follr.com/Communities/DutchessCounty1013Foundation/Index. This charitable foundation aids members of law enforcement who are suffering through financial hardship due to illness, injury - whether suffered on the job or otherwise - or other unfortunate circumstances.
To send flowers to the family or plant a tree in memory of Paul Horaz, please visit Tribute Store
Online Memory & Photo Sharing Event
Online Event
About this Event

Look inside to read what others have shared
Family and friends are coming together online to create a special keepsake. Every memory left on the online obituary will be automatically included in this book.
View Tribute Book
Services for Paul Horaz
There are no events scheduled. You can still show your support by sending flowers directly to the family, or planting a memorial tree in memory of Paul Horaz.
Visit the Tribute Store
Share Your Memory of
Paul
Upload Your Memory View All Memories
Be the first to upload a memory!
Share A Memory
Send Flowers