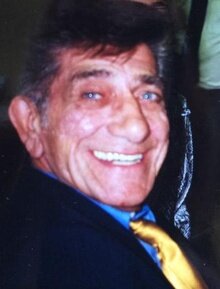 Please share a memory of Samuel to include in a keepsake book for family and friends.
View Tribute Book
Samuel Nicholas Colavito, of Newburgh, passed away unexpectedly on the morning of July 27th of heart failure, surrounded by his children and grandchildren, after an impressive battle against cancer while sporting an even more impressive full head of hair. Born and raised in The Bronx, he served with the National Guard and then worked as a Professional Tractor Trailer Driver for Penske Logistics and Gross and Hecht Trucking, receiving numerous awards for safe driving. His handle was Hollywood Sam on his CB radio because he was always wearing sunglasses, and everyone continued calling him “Hollywood” even after he retired. He was also a proud member of the Knights of Columbus, Monsignor Henry O’Carroll Council #444. An avid reader, a tireless dancer, a social butterfly, a compassionate husband, father, and grandfather–he was always looking out for his family first. He had a big heart, a warm personality, and a smile that would light up a room. He had unforgettable, striking, light blue eyes that were kind and bright, and he was loved by everyone he met. Sam is survived by his children, Marie'Anne and her husband Rob Durst, Linda'Lee and her husband David DeLeo, Billy and his wife Gina, and Laura and her husband Jay Agosta; his grandchildren, Lena and her wife Julie, Dante and his wife Esta, Lara, Ryan and his wife Maggie, Victoria, Trey, Zarah, Joseph, Sam, and Will; his great-grandchild, Cami; his brother-in-law, Pat Peraglia and sister-in-laws, Linda'Lee Bietighofer and Carol Leverone; and many nieces and nephews. He is reuniting with his wife, Rosemary, after only five months apart; his parents, William and Maria Colavito; his sisters, Mary Marchese, Frances Cirillo, and Margaret Coscia; his brother-in-law Joe and sister-in-law Marie Peraglia, and his brother-in-laws Bob Bietighofer and Steve Leverone. Visitation will be held from 5-8 p.m. on Wednesday August 4th at Hudson Valley Funeral Home, Inc. 239 Quassaick Avenue (Rte94) New Windsor, NY. A Funeral Mass will be celebrated at 10 a.m., Thursday August 5th at Our Lady of the Lake 433 S. Plank Rd, Newburgh, NY. Internment will follow at Cedar Hill Cemetery. For those who wish, we’d like to remember Sam with flowers of blue, like his eyes, and white.
To send flowers to the family or plant a tree in memory of Samuel Colavito, please visit Tribute Store
Online Memory & Photo Sharing Event
Online Event
About this Event

Look inside to read what others have shared
Family and friends are coming together online to create a special keepsake. Every memory left on the online obituary will be automatically included in this book.
View Tribute Book
Services for Samuel Colavito
There are no events scheduled. You can still show your support by sending flowers directly to the family, or planting a memorial tree in memory of Samuel Colavito.
Visit the Tribute Store
Share Your Memory of
Samuel
Upload Your Memory View All Memories
Be the first to upload a memory!
Share A Memory
Send Flowers