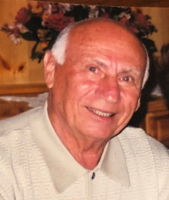 FRANK CANTOLI 1929-2018 Frank Cantoli of New Windsor, New York, died peacefully at home on Monday, December 17th. He was 89 years old. The son of Amalia Barone and Antonino Cantoli, he was born in Abruzzi, Italy. He immigrated to the United States in 1955 and married his hometown sweetheart Filomena D’Alessandro in 1958. Frank worked as a presser with Vicky Clothing Company and later with Loring Coat Company until his retirement at age 65. He enjoyed many hours helping family and friends as an all-around handyman after his retirement; fixing leaky sinks, hanging lighting fixtures, tinkering with lawn mowers as well as babysitting for his grandchildren. He loved making homemade wine using the same recipe he brought from his home in Abruzzi as well as tending to his vegetable garden in the summer. The family would like to thank the staff of 5N at St Luke’s Cornwall Hospital, Advanced Kidney Care and Willcare for the extraordinary care and compassion extended to them during this difficult time. Dr. Wen, Dr. Feldman, Karene, Julee, Esther, LuAnn, Angela, Bob and the many others on the hospital staff for their kindness and support. Frank is survived by his loving wife Filomena, one daughter Diana Fitzpatrick and her husband Frank of Cornwall, New York, and his grandchildren Kristine, Matthew and Ryan. He is also survived by his sisters Nicoletta Settimio and her husband Gusperino of Canton, Ohio, Ada Demasi and her husband Nick of New Paltz, NY, sisters- in -law Anna Cantoli of Middletown, New York, and Maria Cantoli of Abruzzi, Italy as well as 15 nieces and nephews in the US and in Italy. He is pre-deceased by his parents Amalia Barone and Antonino Cantoli, sister Elisabetta Valentino, her husband Domenico, and two brothers, Joseph and Umberto Cantoli. Visitation will take place from 4:00 to 8:00 P.M. on Friday, December 21st at Hudson Valley Funeral Home, 239 Quassaick Ave., New Windsor, New York. A Mass of Christian burial will take place on Saturday, December 22nd, 1:45 P.M. at Sacred Heart Church, 301 Ann Street, Newburgh, New York. Entombment will follow at Cedar Hill Cemetery, Route 9W North, Newburgh, New York