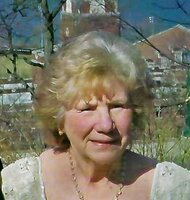 Loretto Ann “Chic” Kennedy 1931-2022 Chic Kennedy, 90, of New Windsor, NY. passed away Tuesday May 31, 2022 at St. Luke’s Cornwall Hospital. She was a loving wife, mother, grandmother, great grandmother, sister, and aunt as well as a true friend to many. Chic was retired from Washingtonville School District. She was preceded in death by her husband of over 50 years Kenneth K. Kennedy and her parents, E. M. Leiser and Loretto Leiser. Chic is survived by her children Robert T. Kennedy, Peggy A. Kennedy and Colleen Battipaglia and her husband Peter. Her beloved grandchildren are Karen Carpenter, and Kevin Battipaglia and her great grandchildren are Ali, Cole, and Mara Carpenter. She is also survived by her cherished sisters Nance and her husband Fred Brisky and Ginny and her husband Bill Shapiro as well as several nieces and nephews. Chic was a member of the Cornwall Garden Club where she has many friends. She enjoyed traveling, having been to many fascinating places around the world, her most beloved place was Africa where she loved every minute of being on safari and the wonderful people she met there. Chic enjoyed trips to Atlantic City with family and friends. She always loved horses and attending horse races as well as watching them on television. Chic spent many hours knitting and made hundreds of hats that she donated to those in need. Heartfelt appreciation and thanks are extended to her friends and neighbors who helped her in many ways during the last years of her life. Services will be held on Wednesday June 8, 2022 at 11:15am at Hudson Valley Funeral Home, Inc. 239 Quassaick Avenue New Windsor, NY. Interment of ashes will follow at Orange County Veterans Cemetery in Goshen, NY.